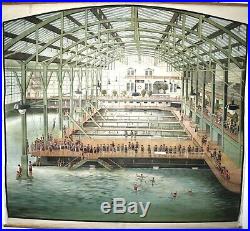 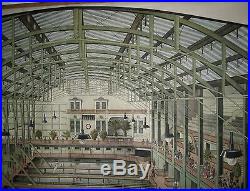 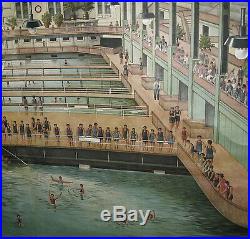 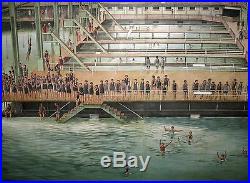 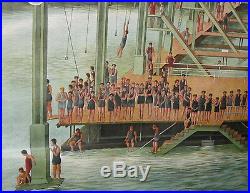 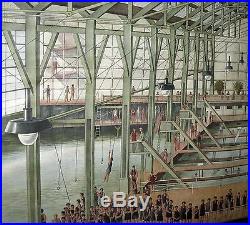 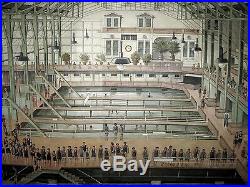 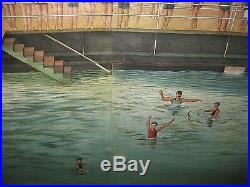 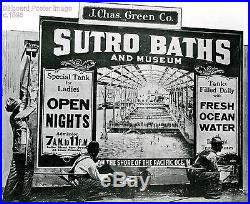 1900 SAN FRANCISCO HISTORIC SUTRO BATHS BATHHOUSE. Extremely Rare Guaranteed Original Huge 78″ x 80″ Color Lithograph Billboard Advertising Poster. Sutro Baths has long faded into the history books of San Francisco and the Richmond District, but that doesn’t mean its not still a hot piece of property. CurbedSF reports that Christie’s auctioned off a 79 x 82 inch color lithograph from c. With its vivid colors and wonderful detail, this rare color lithograph recalls the energy and excitement that surely pervaded this impressive complex. Grand in promotion as well as scale, the Sutro Baths were advertised by large billboards such as this monumental work, composed of six individually printed pieces, which have been assembled in registration and glued together to form the final work. Direct from the Marilyn Blaisdell & San Francisciana Collection. Obtained from George Whitney Jr. Collection during the 1970s. The poster had been stored in six-panel sections in the basement of the historic Cliff House. Marilyn Blaisdell (my mother) worked for George Whitney Jr. During the 1970s when she also operated the San Francisciana memorabilia store located off the entry to the Cliff House. She has published historical San Francisco photograph books including: Sutro Baths, Cliff House & Playland Amusement Park. The 6-panel poster has been professionally mounted on cloth backing including a wood header across the top and bottom of the poster. “A small place would not satisfy me”, he said. I must have it large, pretentious, in keeping with the environment, with the Heights, with the great ocean itself. Completed in 1894, the swimming pools of the Sutro Baths were the largest of their kind in an era when there were many indoor saltwater establishments. This natatorium, at the end of San Francisco’s Ocean Beach, adjacent to the Cliff House, was a pleasure palace intended for the whole family. The swimmers had a choice of seven pools, the largest being unheated, the others (including one of fresh water) heated to various temperatures. Spring-boards, toboggan slides, trapezes, bars, swings, and all purchasable paraphenalia a complete gymnasium, rings… Shoot the chutes, bucking broncos were among the noted attractions. The largest of the Roman baths had about 200 feet of frontage… Two of these great bathing places might be dropped within the Sutro Baths and still leave room enough between them and outer walls for men to walk and women to flirt. The spectacular effect of the baths was prominent in the purpose of Mr. Sutro in planning these baths. Truly one of the best examples of this rare oversize lithograph advertising poster. Packaged securely in rolled format. Your business is always appreciated at BLAISDELL COLLECTIBLES. The item “C. 1900 SAN FRANCISCO SUTRO BATHS BATHHOUSEHUGE 78×80 ORIGINAL BILLBOARD POSTER” is in sale since Thursday, September 26, 2019. This item is in the category “Collectibles\Historical Memorabilia\Other Historical Memorabilia”. The seller is “blaisdellcollectibles” and is located in Denver, Colorado. This item can be shipped to United States.