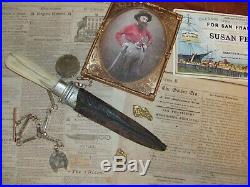 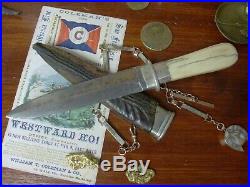 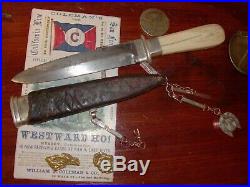 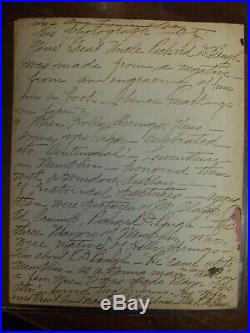 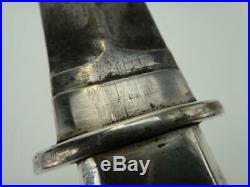 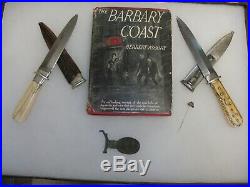 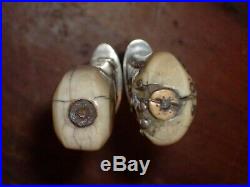 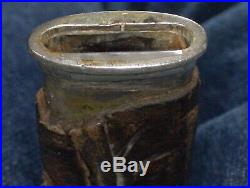 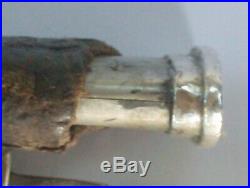 Early silver mounted dirk Knife made in Gold Rush Era San Francisco. The provenance that came with this knife has a note pasted to the photo that mentions a “silver knife” that belonged to a gold seeker named R. Baugh who traveled to California to find gold. This knife is a 9-3/8″ silver mounted double edged dirk with a 5-1/2″ blade and comes with it’s original silver sheath with stepped throat and period leather over-sheath. The provenance is an old 8″x 10″ photograph of an etching of R. Baugh who later became mayor of Memphis Tenn. From 1857 to 1861. The photograph and note is, I believe, c. Late 1800’s and not later than 1920’s. The back has a short history of the photo penned in old iron ink. This photograph of your great Uncle Richard D. Baugh was made from a negative from an engraving of him in a book – hence the markings on his face……. NOTE: Included with this knife is an extremely rare San Francisco newspaper (“THE GOLDEN ERA / March 12, 1854″) with a historical, early knife maker ad for “Hugh McConnell”. McConnell was the earliest known knife maker in S. And the ad is probably the only one like it. There are only a few other similar Hugh McConnell ads known but this particular ad has more meat in it than the other ads that only have three lines with no mention of Bowie knives or dirk knives. This ad has 12 lines beneath the word “CUTLER”. Two lines say: “Will make to order”…. “Bowie knives of the best quality / mounted with either gold or silver”. There is no stamp or mark on the knife to identify the maker but there is a fascinating, unique, stamp on the silver band around the riccasso: S. The stamp is so small it had to be photographed with a macro lens. Each letter is not much bigger than 1/32 of an inch and looks like a jewelers stamp or a silver smith stamp. The deep scratches running through the letters were caused by the rough edges on the inside of the throat. The old western style font is just right for this early period. This great stamp renders the knife an undeniable part of the California Gold Rush. The silver sheath was finished in the rough revealing the seams and joints as you can see in the last two images. It’s very hard to find any sheath made for the high quality San Francisco knives that didn’t have a silver plated finish to hide the seams and joints. This is probably a good indication of a very early make. Also the round nut secured to the tang is iron, or steel, and is not the silver slotted type of nut usually seen on the S. These construction differences are what might be expected on a knife made in the early 1850’s before the new & improved versions were developed. The provenance can’t prove that this knife is the one mentioned in the note but if we dismiss the provenance and evaluate the knife by itself I’d estimate a date of 1850’s to 1860’s. But, taking into account the age of the provenance that mentions a silver knife that belonged to a gold seeker, the knifes early construction characteristics and it’s rare stamp associating it directly with San Francisco I have to assume that the provenance belongs with the knife. The provenance doesn’t say when he got his knife or when he went to California, more than likely in 1849 or early 1850. According to Levine’s book: Knife makers of old S. The records in San Francisco mentioned only one inconsequential cutler working in S. In 1852 but the great fires in early S. (seven or eight great fires from 1849 to 1851) may have wiped clean any earlier records of any knife making in the area. The overall condition is very good. The blade is full but in used condition. The handle has dark, hairline cracks. The silver mounts have scratches and the flush mounted nut on the end has heavy rust. The sheath is covered with a heavy-duty, hand tooled and hand stitched, leather over-sheath that is definitely of the period. The old brown leather is beautifully aged and worn from use and has a gorgeous old western frontier look and feel. The stitching is strong and completely intact. The only thing is that the leather has shrunk tight around the sheath so you can’t see the rest of the sheath and taking it off is not possible without destroying it so it’s best left on. The item “Antique American Bowie/Dirk knife California gold rush San Francisco” is in sale since Monday, June 22, 2020. This item is in the category “Collectibles\Cultures & Ethnicities\Western Americana\Antique Western”. The seller is “atthediggings” and is located in Honolulu, Hawaii. This item can be shipped worldwide.