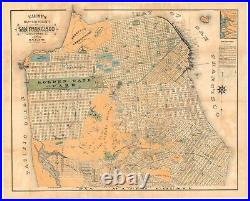 A fine representation of San Francisco before the great earthquake and fire of 1906, in particularly attractive colors. It depicts many interesting 19th century features of the city, including Sutro Baths and Heights, the railway at today’s Land’s End, old rancho designations, waterworks, new land developments, the Lone Mountain cemeteries, and more. Several spurious street names are shown in the Marina, including Tonguin and Lewis. These were planned to be on landfill but were never actually created; Tonguin street is instead Marina Boulevard and Lewis is Marina Green Drive. Even toning and browning throughout the map. Archivally backed for stabilization and strength. Dimensions: 76 x 61 cm (30 x 24 in). Lithographed by the Galloway Litho. Faust issued at least seventeen editions of his map of San Francisco both in pocket form (accompanied by a street directory, city guide, or both, or neither) and as wall maps. All editions of this map are uncommon and sought after. This item is in the category “Antiques\Maps, Atlases & Globes\North America Maps”. The seller is “neatlinemaps” and is located in this country: US. This item can be shipped worldwide.