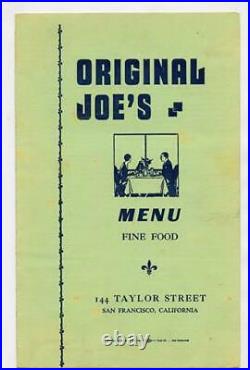 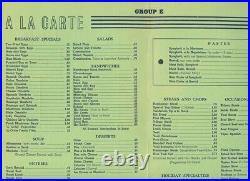 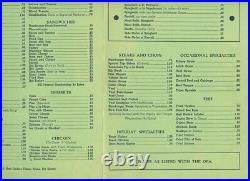 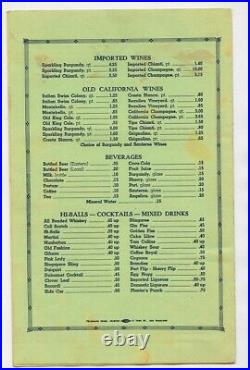 Original Joe’s Menu Taylor St San Francisco California Joe’s Special 1940’s. A 4 page menu from the Original Joe’s on Taylor Street in San Francisco California. Measures about 7″ x 11″ when closed. This menu is circa the late 1930’s. Has wine list and beverages on the back cover. Due to the size limitations of my scanner, the entire menu may not show in some of the scans. From Doordash THE HISTORY OF ORIGINAL JOE’S The name “Joe’s” was a generic name that dates back to the Barbary Coast in San Francisco. During the 1920’s, a group of entrepreneurs decided to open a new restaurant on Broadway Street in San Francisco. The name “Joe’s” had gone dormant for a while and they determined that “New Joe’s” would be a good name. “New Joe’s” became the first restaurant in San Francisco to do exhibition cooking where food was prepared in full view of the customers. It was also the restaurant where the “Joe’s Special” was created. Folklore has it that a customer ordered a spinach omelet very late one night. The customer asked the chef if he had anything else available to cook. The chef replied he had some hamburger left. The customer asked him to throw some of the hamburger into his omelet. The dish became so popular that they eventually put it on the menu. In 1937 the partner’s at “New Joe’s” had a falling out. One of the partner’s teamed up with Louis J. Rocca and Ante Rodin and started a restaurant at 144 Taylor Street in San Francisco. He insisted he was “The Original” so they called the new restaurant Original Joe’s. The restaurant became extremely popular. On May 24, 1956 Louis J. (Babe), Arthur Tortore (Otto) and Anthony Caramagno (Nino) opened “Original Joe’s” in San Jose. The four partners wanted to bring an authentic San Francisco restaurant to the South Bay. They were convinced that if they could keep it authentic, they could serve the community by producing their traditional home-style Italian American Cuisine. Their desire was so great that they actually transported San Francisco French Bread via Greyhound Bus everyday for the first two years of operation. In the early 1970’s downtown San Jose started to flounder. Businesses were relocating to the outskirts of town. Original Joe’s became one of the cornerstones for an ever changing downtown. As the genres of food have changed over the years, Original Joe’s maintains its traditional roots. Still owned and operated by the Rocca Family, Original Joe’s continues to strive to replicate the dining experience that people have enjoyed for over half of a century. In very good condition with cover discoloration. Ckages may be 8 to 18. Powered by SixBit’s eCommerce Solution. This item is in the category “Collectibles\Paper\Menus”. The seller is “herwoldallas” and is located in this country: US. This item can be shipped to United States, all countries in Europe, all countries in continental Asia, Canada.