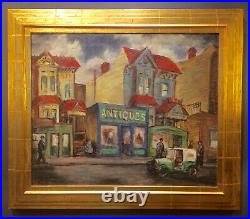 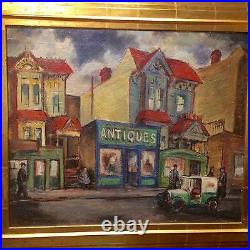 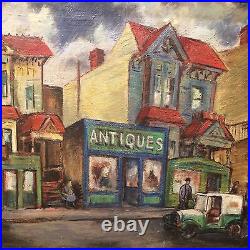 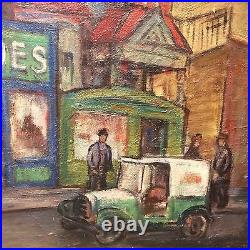 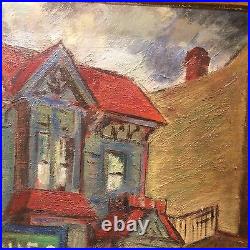 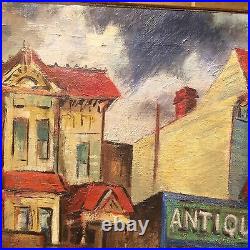 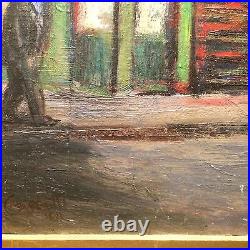 American Original Oil Painting Italian Artist Wedo Georgetti 1954 North Beach SF The painting captures the wonderful and colorful street life of North Beach. Featuring San Francisco’s distinguishable Victorian homes and a quaint antique shop in between. Beautiful painting executed in a Post-Impressionist style. It is painted with oil on a panel with jeweled colors and nice bold direct brush strokes. Painting is signed and dated 1954 on the left side. It is still in its in its original frame. Measurements: 23 x 18 in. 27 x 22 in. Condition: very fine original condition. Comes with gold leaf period art deco frame. About the Artist: Guido “Wedo” Georgetti (1911 December 12, 2005) was an American painter, etcher and lithographer. He was born in Marche, Italy, and came to the United States when he was one-year old. Wedo Georgetti spent many years traveling as a merchant seaman before he gained significant recognition as an artist. It is believed that he used experiences and images from his extensive travels as inspiration for his art. Although in the 1940s Georgetti was blacklisted by the government during the McCarthy era. He was not convicted and continued to painted and exhibit his work. He made frequent visits to France , where he was influenced by Post-Impressionist and particularly , by the Nabis. An innovative theorist, Georgetti was the originator of California Fauvism, which above painting is good example of. He exhibited widely and with success, both at exhibitions and one-man shows (Oakland Art Gallery, 1942-44); Society of American Graphic Artists, NYC, 1944; Maxwell Galleries, 1940’s; De Young Museum, 1945; City of Paris, 1970; He was the recipient of numerous medals and prizes and continued to paint and sculpt up to his nineties. This Painting is in very fine, original condition. It doesn’t show any condition problems. This painting was acquired from a private collection in SF. Clyde Cohen, San Francisco. Marianne Kastner, Larkspur, CA. Rene Starek, San Rafael, CA. This would make a beautiful gift for a North Beach or San Francisco lover. Thank you for looking and supporting our small business. The item “Wedo Georgetti American Social Realist North Beach Painting California School” is in sale since Tuesday, July 5, 2016. This item is in the category “Art\Paintings”. The seller is “leokrivfineart” and is located in San Francisco, California. This item can be shipped to United States, Canada.