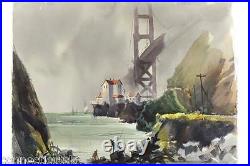 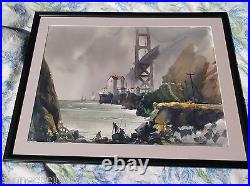 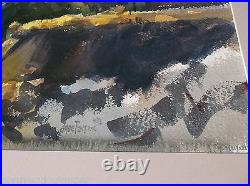 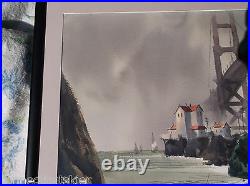 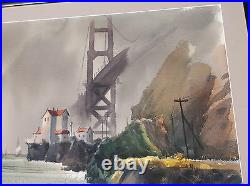 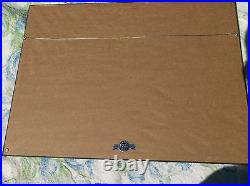 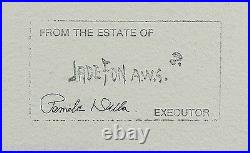 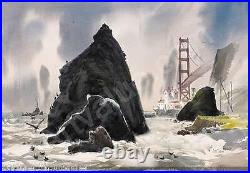 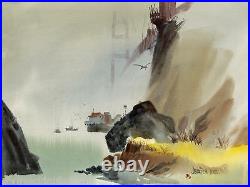 The last 5 images are for illustration purposes, check them out as they are also have the Golden Gate Bridge that Fon painted. If you would like to discuss this painting ask a question. It has new frame and matting, looks really good and it’s Fon’s forte, S. It’s also the large size of about 22″x30″ sheet. This is an excellent and large watercolor by famed California artist, Jade Fon Woo, usually called just Jade Fon in most books. He is extremely well known for his San Francisco cityscapes, and his coastal California and Hawaiian landscapes. I have seen no oils, or portraits, and just a few still lifes by him. In the 1930’s as a very young man he moved back to California to become one of America’s best known watercolor artists, particularly of the San Francisco area. He is a very collectible artist as he has been written in about in numerous books and his art is in multiple museums, six listed on Askart but there are others. As an Asian-American artist it was probably more difficult to get recognition in the United States and I think you might want to check out other Asian-American artists from his era in California such as Jake Lee, Dong Kingman, Si Chen Yuan and East Coast artist Chi Chen. I think that their art will appreciate in tangible and intangible value in American art history. There are many other American artists of Asian descent and many more with Asian influence in their art. Others you might want to check out are Yutaka Ohashi, Kenzo Okada and living artists Mian Situ and Jason Situ. Another remarkable California artist, Tyrus Wong is apparently living still at 105 and I had one of his paintings and he had a long career with Disney as well, including leading the dramatic Bambi scenes. Maine/NM artist, Laurence Sisson lived in Japan for a while and has Asian influences and subject matter in some of his paintings. Check him out, one of the living greats. This watercolor on paper is one of those full sheets by Fon, 30″x22″, slightly smaller when framed. It is framed and matted very well with a new mat and frame and as you can see it is a view of the Golden Gate Bridge in S. The watercolor is in very good condition, with excellent color, possibly never saw the light of day until the past few months. His signature on the bottom right is probably his stamp which he used in many paintings and the back has the estate stamp with the woman’s signature. I believe that the painting might be titled on the back of the thick white paper, but I didn’t photograph it before I had it framed. A bit larger mat might help, but fog is so odd, it lifts at unexpected places and times. I have no idea when this was painted but the fog obscures much of the bridge and he did a number of paintings that show the bridge shrouded in fog. Both watercolors depict a foggy day and although I have never have been on the Golden Gate Bridge, I know fog is not a rarity in the S. If you google “Golden Gate Bridge and Fog” you will see maybe over 100 photographs of the bridge shrouded to varying degrees with fog, some have the entire bridge hidden, or just the top parts of the towers showing. Other photographs show just the North or South ends showing and the other end hidden totally or partially absent of heavy fog. In this whimsical painting Fon painted men fishing in the left foreground. The buildings in the middle, I believe are part of the Limepoint Lighthouse, which grew through the decades and I think the buildings were eventually demolished. There is also Fort Baker in that area as well. Someone might be able to tell me which end is the North and which is the South. I did read the bridge connects S. F to Marin County and it isn’t really painted gold, but red. With the sun shining it appears to be golden some days. Jade Fon is considered one of the finest plein air California artists, and was among the leaders of the California Watercolor Movement that included other greats like Rex Brandt, Phil Dike, Barse Miller and Millard Sheets. Check out that Lorenzo Latimer California watercolor, he was an early great watercolorist. Some interesting facts about Fon is that he taught at a college, started an art school, worked on the movie, “Gone with the Wind, ” and was an entertainer in nightclubs as a singer and emcee in the Forbidden City. Golden Gate paintings are very popular as are his S. F harbor views and his Hawaiian coastal views. Please write me if you have questions. As you can see, they are also foggy views of the bridge. Fon’s prices vary a lot so do your research. The finest galleries like George Stern Galleries in West Hollywood sell his art. The Golden Gate Bridge and San Francisco views are certainly his popular paintings as are some of his Hawaiian vistas. I have that other Fon San Francisco street scene, a remarkable painting as well, I’d argue perhaps is one of CA’s finest w. Ever because of the artistry, one point perspective, excellent condition and appropriate bright and somber colors and of course the social commentary. The item “Jade Fon, Golden Gate, Fog, San Francisco, California Landscape, Asian-American” is in sale since Friday, April 30, 2021. This item is in the category “Art\Paintings”. The seller is “connecticutskier” and is located in Southington, Connecticut. This item can be shipped to United States, all countries in Europe, Mexico, Canada.