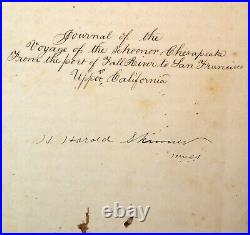 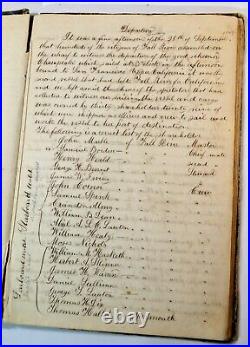 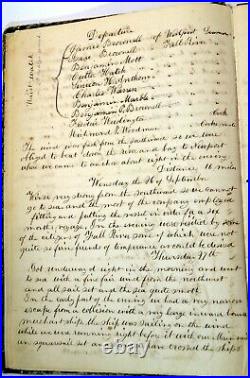 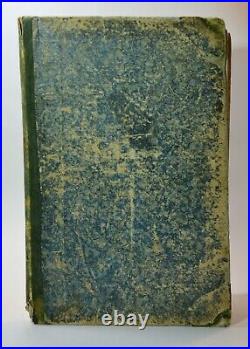 Voyage of the 99-ton Coastal Schooner Chesapeake from Fall River, Massachusetts to San Francisco, CA. On September 25, 1849 the little coastal schooner Chesapeake left Fall River Harbor, Massachusetts, bound for San Francisco gold. The schooner had been built 8 years before and, with John Marble as captain , now carried an unidentified mining company seeking its fortune in “Upper California” (see photos for names). It was a fine afternoon… Hundreds of the citizens of Fall River assembled on the wharf to witness the departure of the good schooner Chesapeake. The author of this log is believed to be H. Harold Skinner, possibly a relative of crew member Herbert A Skinner. Harold Skinner’s name appears on the title page. The log describes the daily weather and other typical observations, giving each day’s latitude and longitude, with distance traveled. Some notable observations and descriptions include. A death and burial at sea. The encounter of a “wreck, bottom up” of a “newly coppered” but unidentifiable Brig. Or Schooner of 125-175 tons. A mid-ocean meet up with the Bark Champion of Westport , loaded with 220 barrls of sperm oil. Interesting account of a “visit from old Neptune” as they crossed the equator (crew member dressing up and putting on a play). Encounter with the Countess of Scarborough of London. Catharine’s on 12 November, 1849. The island is 445 miles south of Rio and was a frequent “layover” spot for US Gold Rush ships. According to an article by John B. Goodman III, published by the Historical Society of Southern California, the Chesapeake left St. Catharine’s on November 25, 1849, to continue its voyage to San Francisco. The item “California Gold Rush 1849 Ship Log Chesapeake Fall River to San Francisco” is in sale since Saturday, June 5, 2021. This item is in the category “Collectibles\Historical Memorabilia\Other Historical Memorabilia”. The seller is “netnomad2″ and is located in Phoenix, Arizona. This item can be shipped to United States.