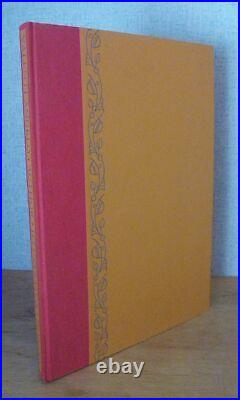 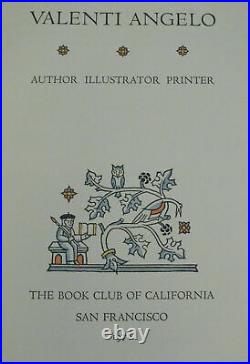 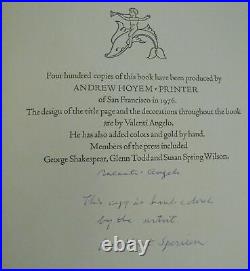 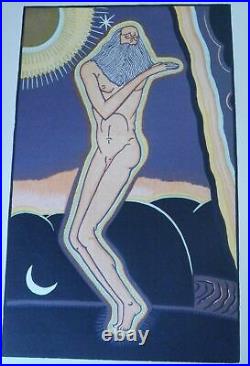 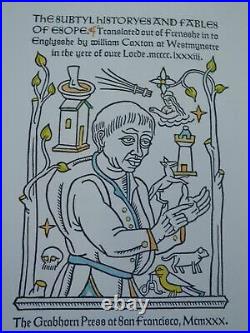 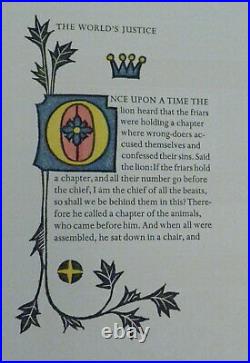 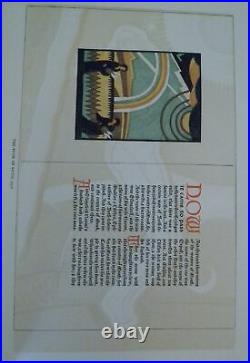 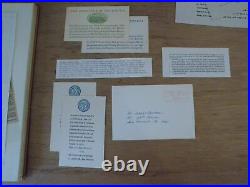 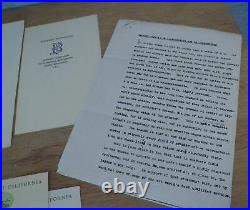 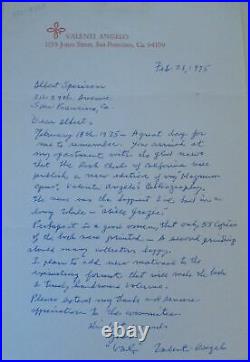 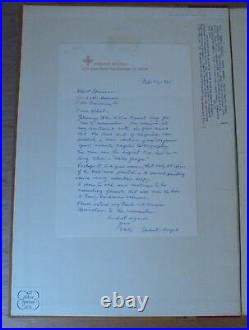 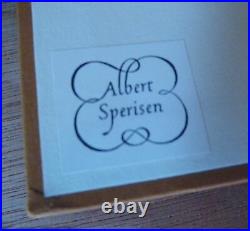 VALENTI ANGELO – 1976 Book Club of Calif #154 – ASSOCIATION COPY HAND PAINTED. TITLE: Valenti Angelo Author Illustrator Printer. AUTHOR: Valenti Angelo; Anne Englund; Andrew Hoyem. PUBLISHER: San Francisco: Grabhorn-Hoyem. EDITION: Four hundred copies of this book have been produced by Andrew Hoyem, Printer. Publication (Book Club of California), no. Includes : A bibliographical checklist of the works of Valenti Angelo/edited, i. Compiled, by Anne England. CONDITION NOTES: FINE with a tipped in item on the first fly page. Condition of laid in items varies but are generally very good. BINDING: Red cloth over patterned boards with a paper label. Created as a special, hand-colored example for Albert Spiersen, librarian of the The Book Club of California and widely known as “the Dean of San Francisco print production”. A longtime San Francisco advertising executive who was widely known as “the Dean of San Francisco print production, ” Sperisen was a former Foote, Cone & Belding executive and bibliophile who became better known after his retirement as the librarian of the Book Club of California, as well as for his expertise as a collector and consultant in the fields of graphic design, fine printing and typography. Born and raised in San Francisco, he attended Mission Dolores Boys School but left after three years to apprentice with his older brother, Francis, in the lapidary business. After a year of working on watch- face crystals, Mr. Sperisen decided to enrol a year of working on watch- face crystals, Mr. Sperisen decided to enroll in the California School of Fine Arts, which led to an apprenticeship as a wood engraver-printer with the Simpson Art Co. In 1928, he joined Lord and Thomas Advertising as an assistant to the art director. In the mid-1930s, Lord and Thomas became Foote, Cone & Belding, and Mr. Sperisen became an art director and worked on the Dollar Steamship and Southern Pacific accounts. In 1935, he earned a national reputation in the graphic arts world by winning a national typographical contest sponsored by the American Institute of Graphic Arts in New York. That same year, the first book he designed was named one of the year’s 50 best-designed books — an honor he was to receive four times. Sperisen became associated with the prestigious Colt Press as a book designer, and he went on to form two private presses, the Toyon Press and the Penguin Press. During World War II, he served as the senior noncommissioned officer for intelligence with the U. Army Air Corps’ 30th Photo Reconnaissance Squadron, which flew P- 38s with cameras loaded in airplanes’ nose sections. In 2,400 missions, the squadron took more than 1 million photographs, from the Normandy beaches to Berlin. In 1953, he became a vice president of Foote, Cone, which by then was the premier advertising agency in San Francisco. He retired in 1974. His membership in the Book Club of California dated back to 1937 and continued until his death. A reference library was established at the the club headquarters on Sutter Street after a significant gift of books came from an anonymous donor. Sperisen was then named club librarian, a post he held at the time of his death. Today, the library includes about 2,000 rare volumes. During his lifetime, Mr. Sperisen also assembled a prodigious book collection of his own. In 1958, Stanford University made him honorary Curator of Typography. His fine printing collection is now housed there. His gifts and collected works of art are now found, as well, at Clark Library at the University of California at Los Angeles and at the Gleeson Library at the University of San Francisco. Sperisen was awarded the Sir Thomas More Medal for book collecting by the Gleeson Library Associates of the University of San Francisco. He was also made a fellow of the Gleeson Library Association and an honorary member of the Roxburghe Club of San Francisco. One of the last exhibits he mounted for the Book Club was for his close friend and fellow bibliophile, actress Gloria Stuart, of “Titanic” fame. In a moving tribute to her “boon companion, ” Stuart called him my “completely involved sailing companion” on the adventure of making the Academy award-winning movie. “He seemed to delight in all my gossipy news of a reborn career, ” she said. He was a true friend. He enriched my life. Bon voyage, dear boy. Another book club member, William P. An eminent bibliographer, collector and founding partner of an Oakland accounting firm, said: If it were necessary to find a single word to describe Albert Sperisen, I would choose’taste. It is not an original suggestion, since Foote, Cone & Belding once used an image of Albert’s face and a glass of wine to illustrate that concept perfectly. It is a quality that has become scarce of late, and Albert’s will be sorely missed. Sperisen is survived by his twin sister, Mrs. Guy Penna of San Rafael, her children, Rosemary U’Ren and Will and Paul Penna, a nephew, Richard Sperisen and his wife, Diane, and two grandnephews. The memorial Mass will be held on Monday, August 2, at 10 a. Ignatius Church on Fulton Street. A reception will follow in the Donahue Rare Book Room of the Gleeson Library. A retrospective of Mr. Sperisen’s life and his collections will be on view. The family prefers that memorial donations be sent to the Book Club of California, 312 Sutter St. San Francisco, CA, 94108, or the Gleeson Library at the University of San Francisco, 2130 Fulton St. Listing and template services provided by inkFrog. The item “VALENTI ANGELO 1976 Book Club of Calif #154 ASSOCIATION COPY HAND PAINTED” is in sale since Sunday, March 7, 2021. This item is in the category “Books\Antiquarian & Collectible”. The seller is “poetryinpower” and is located in San Marino, California. This item can be shipped worldwide.