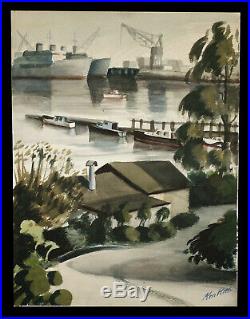 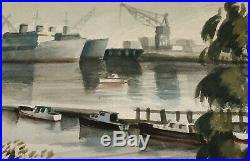 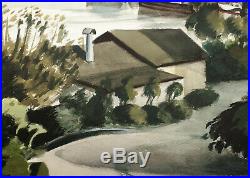 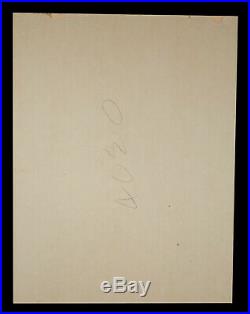 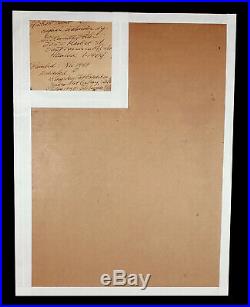 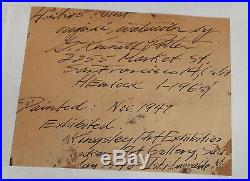 Original Vintage Ken Potter Watercolor Description and Item Information Up for sale is this unframed, vintage, original watercolor painting on paperboard by the listed California artist, Kenneth Potter. Please excuse any glare in the photos. This San Francisco scene depicts the naval shipyard at Hunter’s Point, with large ships and smaller boats. The foreground includes a landscape of trees, with a house or building. The colors are mostly greens and grays. The exterior dimensions of the painting are approximately 15 5/8 inches by 12 inches. It would be a fine addition to a collection of vintage California art. Per these notations, the location depicted is Hunter’s Point. This piece was painted in November 1947. It was exhibited at the May 1948 Kingsley Art Exhibition at the Crocker Art Gallery in Sacramento. Although the writing is partially cut off, the notations seem to indicate that it won 1st Honorable Mention at this event. Potter is a listed artist on askART. Per askART, Ken Potter was born in Bakersfield, and he grew up in northern California during the Great Depression. He started drawing regularly at a young age; he received art instruction through a WPA-sponsored program in Sacramento. In 1939, at the San Francisco Golden Gate Exposition, Potter viewed works by many of the world’s greatest artists, including the French modernists. During World War II, he served in the United States Marine Corps. He saw action as a combat machine gunner. Free moments were spent sketching portraits of his fellow shipmates. Post World War II, Potter visited New York and Chicago. After returning to San Francisco, he studied art on the G. Bill with Carl Beetz, Hamilton Wolf, and Richard Stevens. His interest in watercolors was heightened after attending seminars with Millard Sheets and Dong Kingman. Although he had learned to expertly paint in watercolors, Potter wanted additional instruction. He traveled to France and Italy, studying painting with Jean Metzinger. Potter also attended classes with Fernand Leger and Albert Gleizes. While in Italy, he studied fresco painting and printmaking. By the early 1950s, Potter had one-man shows in Paris, San Francisco, and Rio de Janeiro and he also contributed to group shows in New York and California. Potter painted watercolors daily, visiting the waterfront and Embarcadero which provided inspiration for his paintings of ships, cranes, and industrial objects. He also produced murals in California and France, and he worked as an art director for advertising agencies in New York, Rio de Janeiro, and San Francisco. Potter created set designs for theater productions, worked as a fine art printmaker, and taught watercolor painting workshops in California elsewhere. He passed away in Carmichael, California, near Sacramento. Condition This unframed painting looks great overall, as shown. There is very mild discoloration. Terms of Sale 1. Payments must be received within three days of the end of the listing, unless prior arrangements have been made. And international government regulations prohibit such behavior. Other Information Individual computers may display colors differently. The item “VINTAGE G. KENNETH KEN POTTER CALIFORNIA WATERCOLOR PAINTING SAN FRANCISCO SCENE” is in sale since Monday, August 10, 2020. This item is in the category “Art\Paintings”. The seller is “craigkc” and is located in Sunny California. This item can be shipped worldwide.